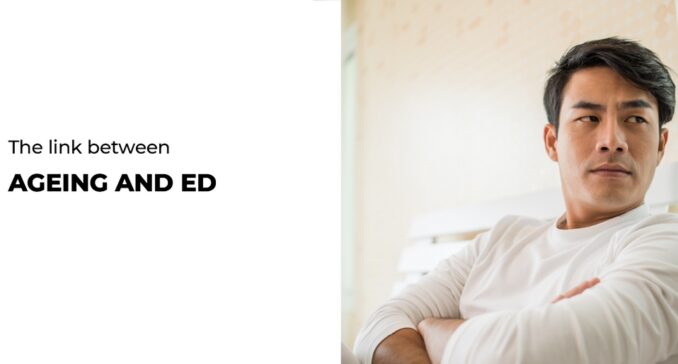 Some people suffer from an occasional ED, while for others, it is a recurring problem that puts a damper on their sex lives. Most men feel too embarrassed about getting erectile dysfunction to ever bring it up with their doctor or even with their partner. ED that doesn’t become a long-lasting problem is prevalent in both young and older men alike. However, the likelihood of experiencing erectile problems increases with age, with the reasons for that being varied and unique to each person.

First, let’s talk about the most common causes of ED in men of all ages. The reason for ED can be broadly divided into causes of physiological nature, psychological nature, or two combined. The sad reality is that as we get older, various physical and mental faculties start to operate at a diminished capacity, which makes erectile problems more likely.

Statistically, erectile dysfunction (ED) does tend to increase among men as they get older; however, many older men still enjoy strong erections and pleasant sex. It is also important to know that  ED may strike men at any age. What needs to be addressed is not age but the causes of ED that may increase with age. ED is frequently a symptom of various health or lifestyle problems. We will discuss them in detail below.

When a person is sexually stimulated, the flow of blood to the penis increases. As the blood accumulates, it hardens the penis, thus leading to an erection. There is a wide range of reasons why the process of blood flow would not be working correctly, leading to erections that fall short of expectation. Cardiovascular issues increase with age and can directly impact blood circulation and the ability to get erections as a result.

Testosterone levels also play a key role because as one gets older, the hormone declines, making it difficult to get an erection. Diabetes, which affects the blood vessels and nerves, can cause erectile dysfunction as well if it is not managed correctly. This has the potential to impair blood flow and diminish responsiveness in the penis. Other preexisting conditions may further contribute to ED.

Side Effect of Medications

Several health-related causes of ED increase with age and can cause a disruption in the processes that lead to an erection. These include Excess weight and diabetes, high blood pressure, too much cholesterol, abnormally large prostate, sleep problems, multiple sclerosis, and brain disorders like Parkinson’s disease.

Heavy alcohol intake, cigarette usage, prescription drugs, anxiety, and depression are some other typical reasons for ED that compound with age. Alcohol impairs arousal by slowing nerve connections between neurons and throughout the body. Tobacco inhibits blood flow and also leads to disorders that impede sexual function.

Before you can think about your treatment options, you have to learn the reason for your ED before you can start to address it. A doctor is the only person who is qualified to diagnose your ED, and if it turns out that it’s not caused due to a serious health issue (such as cardiovascular disease), then you might get the all-clear to start treating your ED with Viagra or Cialis.

ED medications belong to a class of drugs known as PDE-5 Inhibitors that increase the blood flow to the penis to provide an erection for the duration of arousal.

Medications like Viagra (Generic Sildenafil) and Cialis (Generic Tadalafil) which is easily found are commonly prescribed by doctors as a first-line treatment for almost all cases of Erectile Dysfunction. These medications work for almost all men, as long as the cause of ED is not some other underlying health issue.

Other ways to Address ED

ED medications are not the only way to address the ED problem. For example, if your ED is caused by psychological factors like job stress or relationship worries, it would be better if you treated those factors individually to overcome your ED. If you have an unhealthy lifestyle, changing that can help against ED. For example, smoking and excessive drinking harm your cardiovascular health, and too much of either can impair the flow of blood to the penis, resulting in ED. Fatty foods in diet have been related to ED as well. High-fat diets can cause coronary artery blockages and reduce the size of the arteries delivering blood flow to the penis, thus causing ED. Making simple lifestyle changes towards eating healthy and exercising more can make a significant difference in your overall health and decrease the chances of ED.

Don’t accept ED as a part of Ageing

It’s natural for a man to have problems getting an erection now and again. For older men, it may be more common. However, you don’t just have to accept it. If ED becomes a recurring issue, it’s time to see a doctor and determine the cause of your ED. As mentioned earlier, age is not a cause on its own. Managing your general health and resolving chronic health conditions will likely help to alleviate ED symptoms. Regardless of your age, you deserve to enjoy a satisfying sexual life.